DEMONSTRATORS are expected to gather across Scotland as part of a global day of action opposing the Russian invasion of Ukraine.

Protests are being organised across the country this weekend as the conflict between Russia and Ukraine rages on.

Since the start of the full-scale invasion started, more than one million Ukrainians are believed to have fled their homes.

The number, released by the UN refugee agency, amounts to two per cent of Ukraine’s population.

List of solidarity with Ukraine events taking place in Scotland this weekend:

Organisations including the Stop the War Coalition, Code Pink, and the Campaign for Nuclear Disarmament have named this Sunday, March 6, an ‘International Day of Solidarity with Ukraine’.

Branches of these organisations will hold events across the globe including one in Edinburgh starting at 3pm at the corner of Castle Street and Princes Street.

The group plans to form a human chain along both Princes Street.

A statement about the event adds: “Edinburgh Stop the War stands in solidarity with the people of Ukraine and the growing anti-war movement in Russia. Russian troops must withdraw.

“We demand that the British Government opens the border and allows safe passage to refugees.

“We are opposed to the NATO military alliance with its first-strike nuclear policy. We want Britain out of Nato. A secure future for Ukraine and for us all is not possible in a militarised Europe.”

Meanwhile, Glaswegians are being invited to stand with Ukraine at the city’s George Square from 12pm on Saturday.

“Our homeland is under attack so we ask you to please support us to show our families and loved ones that Glasgow stands with them!

“Please join us to stand with Ukraine in Glasgow at George Square on Saturday the 5th of March at 12pm. Bring your friends and share far and wide!” 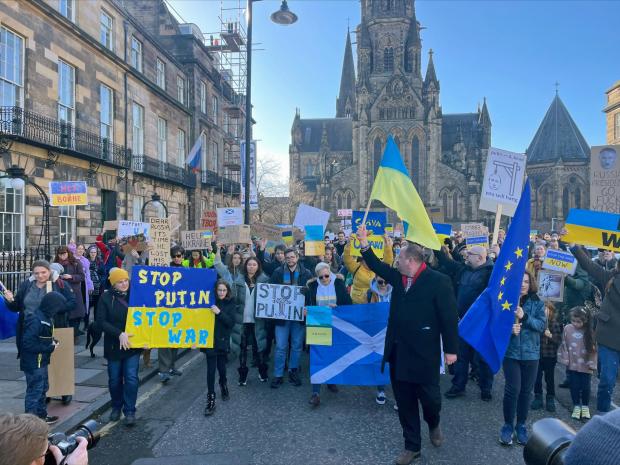 A peace and solidarity protest will take place from 4pm on Sunday on Broad Street, Aberdeen.

The event is co-hosted by CND NE Scotland and Aberdeen Social Centre.

“The international community must stand united in ensuring that we protect and support civilians, and Scotland must strongly reject the violations of international law by Russia and the disregard for Ukraine’s sovereignty as an independent state.”

Previous ArticleDonald MacLeod: The day a Kremlin rebel flew into Glasgow for VIP partyNext ArticleDon Robertson warns abuse is driving new referees out of football – and predicts VAR will help halt the exodus