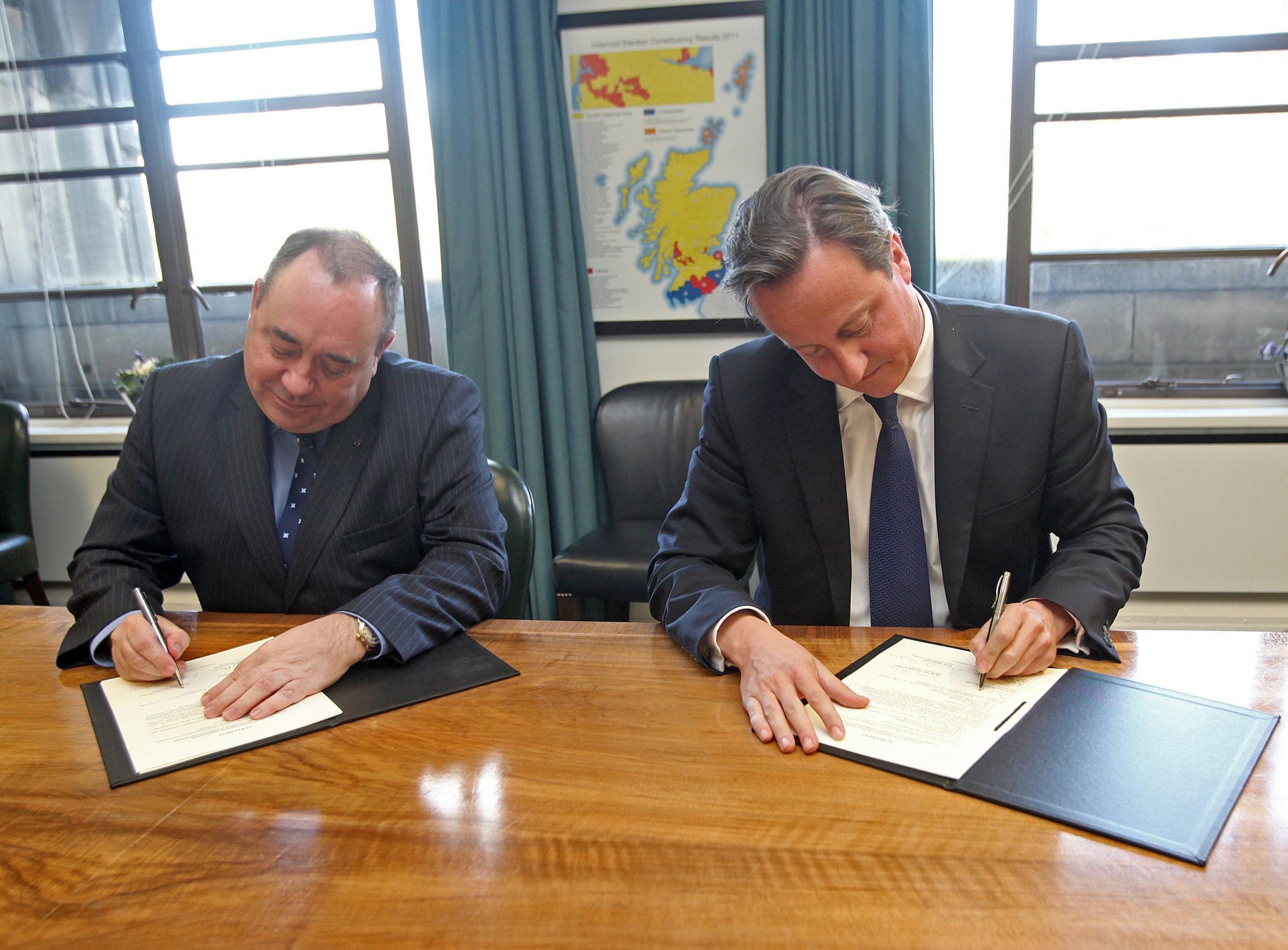 ALASDAIR Galloway (Letters, February 3), a keen supporter of a fresh referendum on independence, appears to be unaware of the irony of pointing out to Peter Russell (Letters, February 1), in relation to proportional representation, that there had already been a referendum on this subject more than 10 years ago, the suggestion being that the matter had been settled.

He then goes on to outline the dastardly ways in which the “unionists” are trying to “prejudice” the outcome of any future independence referendum. One of these is that of “changing the UK voting tradition of 50% plus 1”. Judging by the number of times that this seeps into his correspondence, he is clearly worried by this prospect. The UK, however, does not have “a voting tradition” of referenda. It has a tradition of regular parliamentary elections, and where first past the post applies, 50% plus one has been deemed to be adequate, as the outcome will be revisited in the next election occurring very few years thereafter.

Over recent decades, there has been the sporadic referendum in this country, not all of which have been on a 50% plus one basis. The two most recent were of course on Scottish independence and on leaving the EU and these were overseen by that master of arrogance and insouciance David Cameron, who in relation to the former, blithely let Alex Salmond set the timing and terms. Does Mr Galloway consider that Mr Cameron has set some sort of binding precedent for all future referenda?

It has been pointed out many times that most countries in the world with written constitutions require super-majorities for constitutional change, as do sporting clubs and political parties, including the SNP. It is ludicrous to suggest that the most important decision that could possibly face the Scottish electorate, that of the irrevocable break-up of the 315-year-old Union, could be decided upon on the basis of one extra vote on the day, on perhaps a minority turnout of voters. That could never be “the settled will of the Scottish people”, a phrase beloved of the nationalists, and would be a recipe for future division and discord.

* WHETHER wilfully or out of carelessness, as well as confusing Alternative Vote (AV) with Proportional Representation (PR), Alasdair Galloway ignores my statement that I supported PR when first past the Post (FPTP) favoured Labour in Scotland. I can specifically point to my signing of Charter 88 to refute this.

Above all, I was convinced of PR by the late Robin Cook, and can recall very clearly his typically waspish comments: “If FPTP is said to give us strong government, I am sick to the back teeth of [Thatcher’s] strong government. And if Labour wants to transform British society, we need to have a majority of the electorate behind us in that aim.”

Mr Galloway also insists once again that there is no need for the nationalists to give us a detailed prospectus and that 50 per cent+1 is adequate mandate for major constitutional change. These did not bring about an optimal outcome in the case of leaving the EU – why cannot we learn from that? We should learn from the Brexit debacle that the British way to which he and his fellow nationalists are so attached may not be the best way to proceed in constitutional affairs.

GOVE’S PLAN IS A NON-STARTER

TOM Gordon suggests that Ian Murray had a headline in mind when he called on civil servants to stop working on a new independence prospectus, and rightly described it as “an absurd request”. However, Mr Gordon must also have had a headline in mind when he writes that the independence prospectus will be “a sitting duck” (“Next prospectus for independence will be a sitting duck”, The Herald, February 3). I would suggest that without independence, Scotland will remain a sitting duck with Trident weapons of mass destruction sitting in our waters, cold Brexit winds blowing across the country, and dumb and dumber governments we didn’t vote for holding sway at Westminster.

As we’ve witnessed this week, a man who apparently doesn’t know the meaning of the word “truth” and who has repeatedly misled Parliament is allowed to remain in the House of Commons, while a man who did speak the truth is thrown out.

As Boris Johnson lurches from one disaster to the next, a cunning plan is devised to divert attention away from the Prime Minister’s plight, as Michael Gove presents his “levelling up” scheme which has rightly been called “meaningless window dressing” and “frankly insulting” by the SNP’s Tommy Sheppard (“Levelling up Gove report branded power grab”, The Herald, February 3). Most ludicrous of all, Mr Gove has suggested in an interview with Times Radio that the unelected, undemocratic House of Lords could move to Glasgow while renovations were taking place at Westminster, and that such a move “would do us all good”.

I cannot imagine what good that champagne and snoozing chamber for failed politicians who can claim hundreds of pounds a day for just turning up would do for Glasgow, and I suspect that Mr Gove’s nonsensical proposal will be greeted with a Glasgow kiss.

CRITICS ARE BOOSTING THE YES CAUSE

UNDER this Tory Government, we are currently witnessing the biggest elephant in the Westminster room since – well, since the last one.

This has led to many Tory peers and MPs – lightweight and heavyweight – to seek the resignation of the Prime Minister on a daily basis.

You would imagine that those who support the Prime Minister and indeed the Union would be keeping their heads well below the parapet in this time of lies, deceit and fraud within that cesspit of sleaze otherwise known as the Mother of Parliaments. Far from it, for what we are seeing is the complete opposite.

Presumably in an attempt to divert attention, a small number of serial “ SNP bad” correspondents are ignoring the large elephant and writing letters seeking to stir up the most tenuous nonsense regarding the Scottish Government.

To be honest, I no longer trust any figures emanating from the UK Government and have not done so for a considerable time. Instead, it is to independent, respected experts outside the UK that I turn and learn the facts about important subjects such as the truth behind the GERS figures, the educational performance in Scotland’s schools and universities and Scotland’s response to the pandemic and vaccine rollout.

Without being blasé, it’s clear that Scotland is doing very well.

However, may I encourage the cabal of “SNP bad” correspondents to keep on with their letters, as I am convinced that they have inadvertently become very effective recruiters for the independence cause.

AS an independence supporter, I despair once again at the SNP, this time over its plan to spend £300,000 of our money to cut a couple of inches of the bottom of 2,000 school classroom doors to improve ventilation (“Ministers accused of plans to ‘chop classroom doors’ to improve ventilation”, The Herald, February 3). Can I offer a simple and cheaper alternative? Leave the doors open.

UKRAINE CRISIS IS GOOD FOR THE USA

THE peaceful unity of the Western European nations has been undermined by the madness of Brexit and the prosperity of the US armaments industry has been undermined by the withdrawal of western forces from Afghanistan. The first of the above has no doubt emboldened Vladimir Putin, which in turn has given the US a timely opportunity to highlight threats to Ukraine with consequential justification for increased orders for weaponry. A threat of military engagement somewhere far away from the US in which US forces are unlikely to be directly engaged is seldom bad news for the US economy, particularly in the aftermath of a pandemic.

It’s an ill wind that blows nobody any good.

* I WAS concerned that the Prime Minister went to Ukraine and for what reason given the uproar he is currently causing in our own country (“PM tells Putin: Invasion a massive mistake”, The Herald, February 2), so I checked the current map of Europe.

Ukraine is bounded by Russia, Belarus, Poland, Moldova, Slovakia, Romania and Hungary, of which four are members of the EU, which the UK has left.

The whole visit smacks of imperialism. A distraction from current UK affairs. Interfering at the behest of the Americans who, if asked, would have no idea where Ukraine, or even, Europe, was in the world.

While I do not expect the UK to drop our heads in the sand, surely this is an EU issue and a situation that we are best kept out of, particularly as we have neither the financial nor moral stability to be sending troops.

Read more: Must we be forever cheated by the electoral system?

Previous ArticleWhen is Andy Murray playing next? Taro Daniel Australian Open match detailsNext Article‘Most expensive’ croft yet on the NC500 is all yours for over £800k