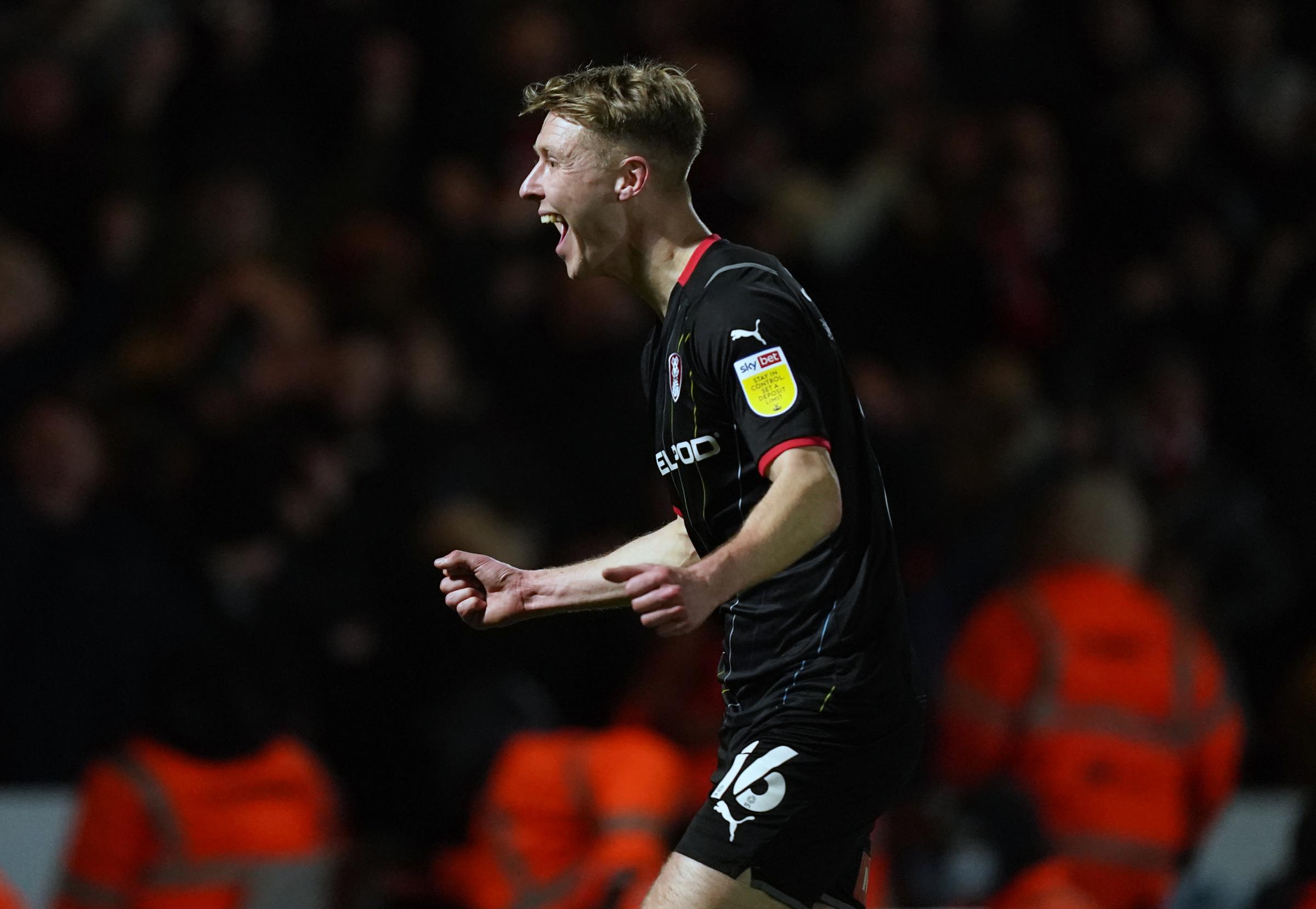 Scottish footballers were long in demand in English football before a perception emerged down south that the game here was vastly inferior.

But Brexit, budget constraints and a changing perception among clubs has brought Scottish players back into vogue. Starting this week, our Scots Down South will be profiling some of those players you will have heard of – and some you might not have – who are making a name for themselves over the border . . .

It’s been a peculiar season for Jamie Lindsay. On the one hand his club Rotherham United seem set for a return to the Championship at the first attempt. On the other he has found himself on the outside looking in for large parts of the Sky Bet League One campaign since he sustained a hamstring injury in October and missed six weeks of the season. With the team sweeping all before him and three excellent midfielders taking their chance in his absence returning to the first team has been a case of waiting for an injury elsewhere.

There’s no shame in that, of course. One look at the league table tells you that Rotherham are a formidable outfit, Paul Warne’s men have got the best defensive record in the league, have scored the second most goals and sit proudly at the top of the division seven points clear of Wigan Athletic in second, albeit with two games more played.

It’s not that he isn’t good enough to start – on the contrary. The 26-year-old former Ross County and Celtic midfielder would have been Rotherham’s player of the year in the Championship last season – Warne was touting him for a Scotland call-up – but for another hamstring injury last February that robbed him of momentum and matches. In many ways it is the story of Lindsay’s time at the club: in his first season his new-born second son fell ill and spent three weeks in hospital which further interrupted his playing time. The stop-start nature of his spell at the club has been frustrating for all concerned. Paul Warne, the Rotherham manager, loves Lindsay as do the fans and, for Lindsay, the feeling is mutual.

The energetic, tough-tackling midfielder has been one of the best players in English football’s lower reaches since his arrival from Ross County in 2019 but Dan Barlaser, Chiedozie Ogbene and Ben Wiles – immovable objects during Rotherham’s surge to the top of the table – have been so impressive themselves that Lindsay has been unable to force his way back into the starting line-up.

While he has played in 21 of Rotherham’s 35 league games this season, missing out on matches does not sit easily with Lindsay. He once admitted in an interview that he was one of the “slower developers” during his time at Celtic which possibly explains why he feels he must make up for lost time. It also helps give context to why he was interested in a move to Portsmouth in January before Rotherham rebuffed the offer.

“I think when Jamie is a regular [in the starting team], he is a very happy man at Rotherham but he is the kind who wants to play, he’s a competitor, it kills him when he’s not in the team,” says Paul Davis, football writer for the Rotherham Advertiser. “I remember when he pulled his hamstring earlier this season and the first game he missed was Cheltenham away and the club asked him to do club commentary for the radio on iFollow and he said ‘no’. It wasn’t that he was being unpleasant in any way, he’s a really helpful lad, it’s just that he couldn’t bear to talk about a game that he wasn’t involved in.”

This is hardly surprising for anyone who might have followed Lindsay’s career closely. He left Celtic for first team football rather than wait around collecting good money. He wanted to play and had loan spells at Dumbarton, Morton and Ross County before making a permanent move to Dingwall in 2018.

“Some boys leave Celtic without playing a minute of senior football,” he once said. “If you’re leaving Celtic having never played a senior game, then it’s tough for someone to take you. I knew I was ready and after my loan at Ross County, I knew what I was getting into. I was excited to go and prove myself.”

He was a popular figure in Dingwall as he helped lead the Highland outfit to the SPFL Championship title and the Scottish Challenge Cup in 2019, scoring nine times along the way. It was no surprise when that form caught the attention of Rob Scott, Rotherham’s head of recruitment.

“Rotherham scout well in Scotland,” says Davis. “They got Will Vaulks before Jamie. Rotherham know what they are in doing up there [former Hamilton Accies Mickel Miller and Hakeem Odoffin are also at the New York Stadium]. They paid about £200,000 for him – bear in mind Rotherham’s record signing is Freddie Ladapo for £400,000 – it was a significant outlay for Rotherham. The club is run very wisely, they want value for money so obviously they saw something to pay that amount of money for him.

“He’s an excellent player. He has spent two seasons in League 1 but he is Championship standard, maybe his best year was last year in the Championship and he was the standout player. He would have got player of the year but he pulled his hamstring in February and that put him out for eight weeks. Rotherham were on a really good run [at the time] and looking like they might stay up and they faded away in his two month absence. This year, Rotherham are very strong in League 1, look like they are going up again and they have got a fantastic midfield three. Earlier in the season, it was any one of four players for that midfield three and he was very much in the mix but he pulled his hamstring again, went out of the side for six weeks and the other three just played so well that he has struggled to get in since. Everyone at Rotherham loves him, he’s a great player, a lovely lad. His GPS stats are off the chart, he’s a nasty little sod on the pitch, which we all love about him, but a really nice kid off the pitch,” adds Davis of the Larkhall-born Lindsay.

Rotherham would love Lindsay to sign a new contract and have a year’s option on him at the end of the season which they have indicated they will take up. There are no guarantees that he will stick around, of course, but Rotherham know they will get full commitment from Lindsay should he be called on to start again as they close in another promotion.