SCOTLAND’S biggest health authority is to carry out an independent review of inflammable insulation material used in Grenfell Tower which remains in place at Scotland’s super-hospital despite concerns that there was “deceit” over its safety marketing.

In December, 2020 the Herald on Sunday revealed that the NHS Greater Glasgow and Clyde which insisted the material used at the 197ft-high Queen Elizabeth University Hospital in Glasgow was safe had applied to have it removed in 2017.

But it had continued to insist that it would not consider removing the Kingspan Kooltherm K15 insulation which remains in place four-and-a-half years after the Grenfell Tower blaze that claimed the lives of around 80 people in June, 2017.

This was despite evidence provided to the Grenfell inquiry that Irish group Kingspan marketed its K15 insulation with fire test certificates which did not represent the product being sold.

Retired Scots architect Robert Menzies who was involved in designs for the new children’s hospitals in both Glasgow and for Edinburgh had questioned the legality of its use on a building over 18m in height.

He said the original fire rating of K15 “fails on all levels and at all heights” and should never have been installed on any part of the hospital facade in the first place.

Now following concerns from the Scottish Tenants Organisation over the use of potentially dangerous cladding, a senior Scottish Government Health Finance and Infrastructure official has confirmed that an independent review over the use of the cladding at the hospital is to be carried out.

Alan Morrison, the interim deputy director for health infrastructure and the Scottish Government lead on the policy advice over cladding has said an independent review is being carried out.

He said that in order to raise issues and inform his response, he wrote to the NHS Greater Glasgow and Clyde, the NHS Scotland board responsible for the Queen Elizabeth University Hospital.

“They have informed me that NHS GG&C fire risk assessments take a precautionary view of the existence of K15 within the QEUH due to the absence of reliable data from the manufacturer.

“NHS GG&C maintain regular enquiries to Kingspan on progress and results of their independent testing of the K15 product, which are expected in Spring 2022.

“When received, these will inform a further review of NHSGGC Fire Risk Assessments.

“Previously, NHS GG&C had been advised that the construction of the QEUH was fully complaint.

“However given the information available as a result of the Grenfell Inquiry they are considering the legal implications and have commissioned an independent review of all available contemporary data.”

NHS GG&C have identified locations of K15 which are in low level areas of the external podium of the QEUH and in limited quantities.

Mr Morrison said that the Fire Risk Assessment therefore reflects that the risk of serious fire “is mitigated by the location and the active and passive fire protection measures in place”.

“The safety of NHS Scotland facilities is something that the cabinet secretary for health and social care and the Scottish Government take extremely seriously, and we will continue to monitor this situation closely and engage regularly with NHS GG&C,” said Mr Morrison. 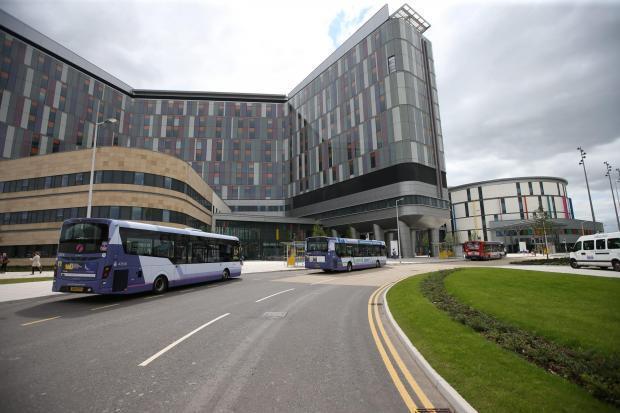 The letter came after Sean Clerkin, Scottish Tenants Organisation campaign co-ordinator wrote to the health secretary warning about the continuing risk from K15 and calling on him to intervene to “get this unsafe insulation removed as a matter of priority”.

He said after the letter emerged that it was “shocking” that the health board management had delayed for so long on the issue”.

“This K15 insulation must be removed from the hospital building immediately and replaced with non combustible insulation to safeguard the lives of patients,visitors and NHS workers,” he said.

“I would urge the Health Secretary Hamza Yousaf to provide the money so that re-mediation work can be carried out immediately.”

K15 has never been replaced at the hospital after NHS Greater Glasgow and Clyde said four years ago that Multiplex, the main contractor for the construction provided assurances the material was properly installed and met “Scotland’s stringent building and fire safety regulations”.

Evidence stating there was “deceit” over the marketing of the safety of the K15 insulation has been revealed to the disaster inquiry.

Evidence provided to the Grenfell inquiry heard current and former staff of insulation manufacturer Kingspan tell about efforts they went to in order to convince the construction industry K15 was safe to use on buildings above 18m – despite a lack of genuine test data.

One former executive said that the firm was involved in a “deliberate and calculated deceit”, which involved marketing the product without solid test evidence.

Kingspan technical manager Ivor Meredith said he was uncomfortable with how the company’s K15 insulation was being marketed, and that he was “under pressure” to get test results that proved it was safe.

Kingspan had denied wrongdoing and said it did not know its material was being used on Grenfell.

Last month it emerged Kingspan could be one of several companies facing bills for repairs to buildings now judged unsafe following Grenfell.

Communities secretary Michael Gove indicated to a UK parliament committee that he intended to make Kingspan, Saint-Gobain and Arconic pay to bring buildings into line with regulations passed following the Grenfell fire in London in 2017 In December, last year, the health board when asked about the evidence produced about K15, said that there was no need to reconsider whether to remove the insulation.

A spokesman said: “The insulation was installed at the QEUH in accordance with stringent building regulations.

“At this time, there are no new requirements that necessitate the replacement of the Kingspan K15 insulation. However, we will, as a matter of course, ensure that we are responsive to any future changes in regulatory requirements.

“As mentioned before the hospital is designed and equipped to the highest standards for fire safety. It has heat and smoke fire alarm systems combined with automatic fire suppression sprinkler systems fitted in all areas, is equipped with designated fire-fighting apparatus and has fire evacuation lifts.”

Mr Menzies said that the original C-rating K15 fire designation from 2016 meant it was “illegal” on a building over 18m in height unless it has passed a BR135 fire test.

Mr Meredith in evidence to the inquiry said it was “common knowledge” that Kingspan was relying on a fire safety test certificate from “old technology” for the materials used on Grenfell Tower.

A newer version of combustible K15 sold from 2006 onwards was observed by Mr Meredith as having “burnt very ferociously” in one failed cladding test, but the firm persisted in using a 2005 test pass from an older version of the product to sell the newer one, the inquiry has heard.

In October, last year, it was confirmed that test certificates for K15 from the 2005 tests had been withdrawn.

Kingspan said: “It became apparent that the K15 manufactured in 2005 would not be representative of the product currently sold on the market from 2006 to today.”

By early-2015, a matter of months before the Glasgow super-hospital opened, the NHBC had placed ultimatums on Kingspan to provide test data to prove that Kooltherm K15 insulation was safe for use in buildings more than 18 metres tall.

A letter from housing insurers NHBC (National House Building Council) to the insulators in 2015 said: “The absence of evidence from Kingspan means we will soon be faced with having to decline to accept buildings currently under construction with K15 products” without further evidence to support it could be used in tall buildings.

A response from Kingspan’s solicitors, Fenwick Elliott, requesting more time to prove they can be compliant, promised further action.

On March 7, 2018 the health board put forward a building warrant application to remove the K15 insulation and replace with 75mm thick Rockwool Rainscreen Duo Slab insulation.

According to city council records, the application was later withdrawn and replaced in August, 2018 with applications to remove cladding, with no reference to removing the K19 insulation.

The health board, which was placed in “special measures” by the government amid criticism of its infection control procedures previously confirmed K15 insulation was part of the cladding systems and was not replaced “as it does not pose a risk”.

2015 video shown during the official opening ceremony of the QEUH, by Her Majesty The Queen.

The Irish company recently said it agreed with a statement made at the inquiry, which is still in progress, that the polyethylene cored cladding used on the building – which was not a Kingspan product – was mainly to blame for the fire’s spread.

“Any considered review of the available evidence supports our position that the type of insulation used on the tower made no material difference to the nature and speed of the spread of the fire,” Kingspan pointed out.

However, the Grenfell inquiry uncovered emails from Kingspan UK staff dating back to 2009 that joked about the fact that fire safety tests on K15 were flawed.

Kingspan maintains that tests on K15 have since been repeated and provided evidence to support the original safety claims for the product.

“Arising from the inquiry process, Kingspan has identified and apologised for process and conduct shortcomings in its UK insulation business,” the group said recently.

Following independent reviews, the company says it has taken steps to ensure there would not be a repeat of the shortcomings and reinforced its focus on fire safety.

Bereaved and survivors of the Grenfell Tower fire have been demanding charges against those responsible for the disaster, amid a warning that patience is running out more than four years on from the deadly blaze.

A silent walk organised by campaign group Grenfell United was held for the first time in 18 months in mid December, as those affected joined together near the site to remember the lives lost and countless others caught up in the events of June 14, 2017.

The walk also came a week after Mercedes ended its controversial sponsorship deal with Kingspan, saying it was “not appropriate” to continue the partnership.

Kingspan’s logo appeared on the helmet of Lewis Hamilton at the Saudi Arabian Grand Prix, sparking protests due to the use of Kingspan products in the tower.

Grenfell inquiry hearings have adjourned for the Christmas period and will recommence on January 24.