Chalmers, who went through the Strictly experience last year with partner Amy Dowden, says the finalists will be feeling exhausted at this stage as they reach the climax of the competition.

And he revealed his favourite to win is EastEnders actor Rose Ayling-Ellis and partner Giovanni Pernice.

TV presenter Chalmers, who suffered life-changing injuries from an IED blast in 2011 while serving in Helmand Province, Afghanistan, said: “It is such a marathon and they will be feeling exhausted right now, but at the same time they will want to enjoy every little last second of it. It’s not that it sort of ends because you are always part of the Strictly fraternity, but your life completely changes because you have been living with this other person essentially. I was seeing Amy for 10 hours a day and they are about to experience these Strictly blues. They need to enjoy the very last moment of it.

“The whole cast will be back together again and that is all very exciting. They will have to gee themselves up one last time and I also know that they will have no problem doing that because it is the greatest rush on earth when you are out there on that stage and you want to savour every second.”

As for his prediction he believes Rose Ayling-Ellis and partner Giovanni Pernice will take the title.

He added: “Anyone of them is a deserved winner. The finalists stand for something bigger than the show which I think is really important. Yes it is an entertainment show and a bit of fun, but a public service broadcaster has a responsibility to choose wisely who they put in these positions because a lot of people watch it they have a platform. When you look at someone like Rose or John and Johannes and even AJ, the way that they have used their platform is exemplary, but I reckon it is going Rose’s way.”

His prediction came as AJ Odudu was forced to pull out of the Strictly Come Dancing final after suffering a torn ligament in her ankle, the BBC has announced.

The TV presenter and partner Kai Widdrington were due to compete on Saturday night against soap star Rose Ayling-Ellis and partner Giovanni Pernice and baker John Whaite and partner Johannes Radebe for the glitterball trophy, but her ability to perform had been thrown into question after injuring herself in rehearsals.

The duo have now pulled out of the live final after consulting medical professionals regarding her foot injury.

Odudu, from Bolton, said in a statement: “I’m deeply upset that I am unable to perform in the final due to a torn ligament in my right ankle.

“Learning to dance over the last 13 weeks has been an incredible honour and to do it alongside someone as special, patient and devoted as Kai is something I’ll treasure forever.

“Thank-you to the Strictly family for the experience, the medical team for trying to get me back on my feet, and mostly to everyone at home for watching and supporting.

“You’ve made this experience one to remember. Strictly Come Dancing has been a lifelong dream and I’m glad it came true.

“Good luck to my partners in dance, John and Johannes and Rose and Giovanni. I will be cheering you on (on one leg).” 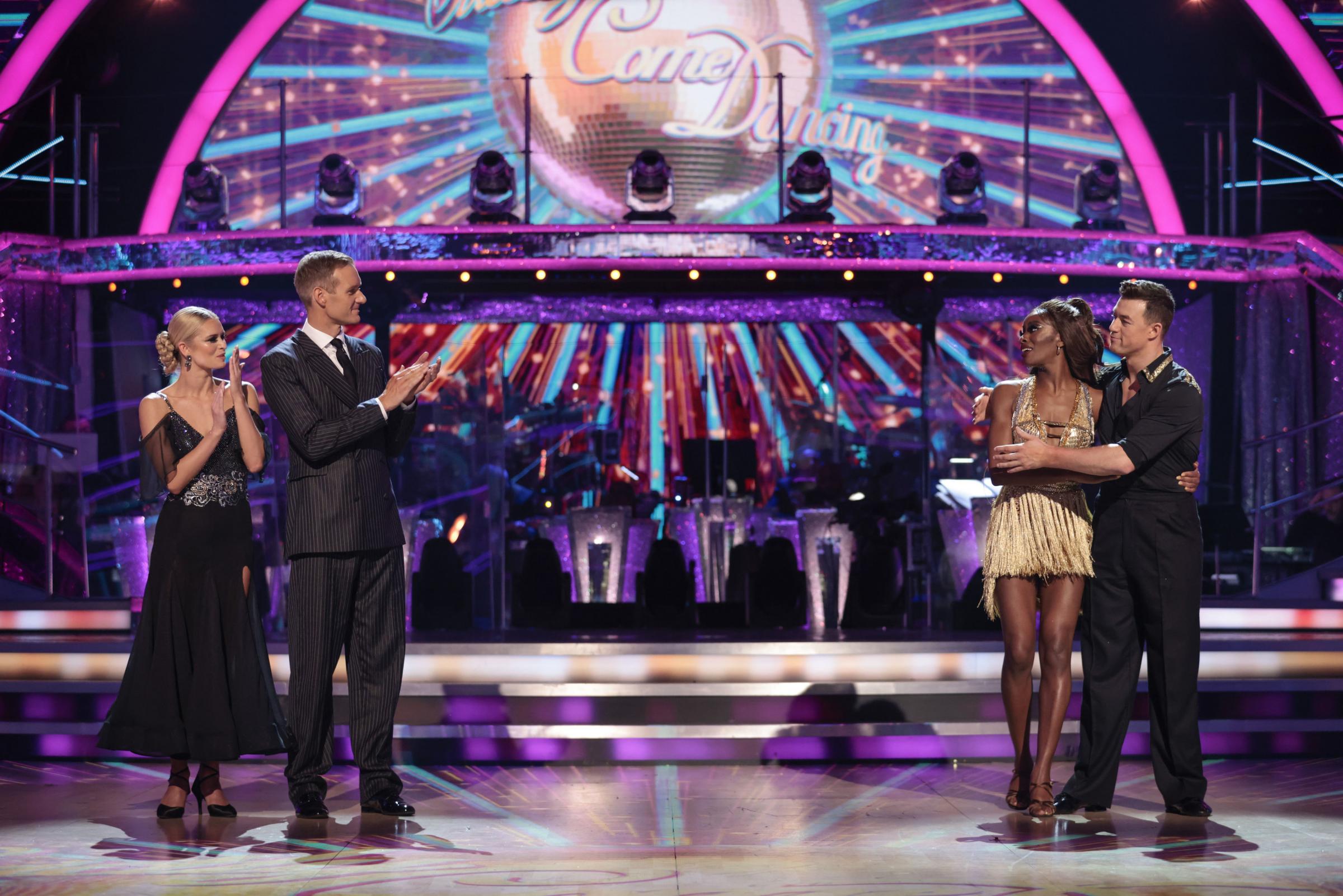 Nadiya Bychkova and Dan Walker with AJ Odudu and Kai Widdrington after the judges decision.

Widdrington said: “I’ve been absolutely honoured to get to dance with the incredible AJ Odudu for the last few months and although neither of us wanted our journey to end this way, AJ’s health and safety are by far the most important things.

“I want to thank AJ for being the absolute best partner I could ever have asked for in my first year on the show and I will always treasure the memories of dancing in the Strictly ballroom with her.

“I know we will be friends for life and I will be there for her through her recovery in whatever way I can.

“I want to wish good luck to John and Johannes and Rose and Giovanni for the final.

“Finally, the biggest thank-you to everyone who voted for us throughout the series, your support has been unforgettable.”

Odudu had previously said the pain in her ankle was so bad that she vomited and earlier this week she was unable to stand on her right foot or stand up at all without crutches.

It is unclear how this will impact the format of the show, which is due to run for more than two hours.

Sarah James, executive producer of Strictly Come Dancing, said: “AJ may not be able to compete in the final but she is and always will be one of the most brilliant Strictly finalists we have ever had.

“We cannot thank her enough for fully embracing the experience and being a total delight both on and off the dancefloor.”

Strictly judge Motsi Mabuse shared the announcement post on Twitter and wrote: “So Sad but our health comes first! Get well soon & congratulations for a phenomenal series!!”

The Strictly Come Dancing final is on BBC One on Saturday at 7pm.