Boris Johnson has heaped praise on the response of the British public to the war in Ukraine as he reiterated his belief that Vladimir Putin would fail in his invasion of the country.

The Prime Minister said it was “absolutely vital that Vladimir Putin understands that this hideous, barbarous assault cannot succeed and that he will fail”.

In a video message on Twitter, Mr Johnson said: “I want to thank businesses, community groups, individuals, sports clubs, who’ve been coming together to support Ukraine.

“I think of the group in Northern Ireland that’s got a local warehouse as a centre for supplies to go to the war zone, I think of Inna Schorr, a London-based Ukrainian who’s raising thousands of pounds, while her own family are still back in Ukraine.

“And don’t forget to for all Ukrainian families here in in the UK, we have ways that you can bring your wider relatives back to the UK.”

More than £85 million has now been raised to provide aid for Ukraine through the Disasters Emergency Committee (DEC), in what has been described as an “absolutely incredible” show of support from the UK public.

The Government has pledged to match public donations to the appeal pound-for-pound up to £25 million.

Collections of donated items have also been taking place across the country, but DEC chief executive Saleh Saeed told BBC Breakfast: “What we would advise is the things that people collect today here in the UK are not necessarily what people need tomorrow.

“That’s why we would urge, please donate cash through a reputable charity.

“Trying to transport goods from here, the UK, thousands of miles to Ukraine will take a long time and may not be necessarily what people need when it arrives.”

Mr Johnson’s thank you message came as hundreds of people gathered in cities across the country to protest against Russia’s assault on Ukraine.

In London’s Trafalgar Square, the Ukrainian national anthem was sung and “stop Putin, stop the war” chanted, as demonstrators draped themselves in the country’s flag.

The rally began with a prayer led by Archbishop Claudio Gugerotti, the papal nuncio to Great Britain, who said: “Today we are all Ukrainians.” 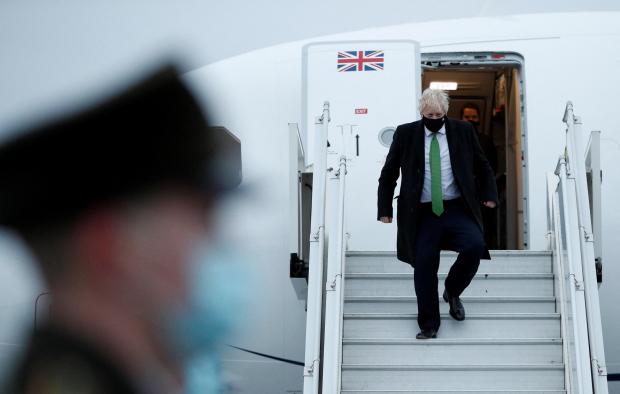 Volodymyr Shevetovskyy, 31, and his girlfriend Nadiia Soshenko, 27, from Kyiv, said they were grateful for support from western countries but called for a no-fly zone to be imposed over Ukraine.

Ms Soshenko told the PA news agency: “There are already a lot of deaths in our country.

“Nato is afraid to close the skies saying that they’re afraid to start the third world war.

“Excuse me, what’s happening right now? Why the whole world can’t stop one insane, mad person? I just honestly do not understand why our people are dying, are dying for what?”

Nato allies have ruled out implementing a no-fly zone over Ukraine amid fears it could prompt an all-out war with nuclear-armed Russia.

On Saturday, Russian President Mr Putin warned the Kremlin would consider any third-party declaration of a no-fly zone over Ukraine as participation in the conflict.

Mr Putin said Russia would view “any move in this direction” as an intervention that “will pose a threat to our service members”.

“That very second, we will view them as participants of the military conflict, and it would not matter what members they are,” he said.

However, Ukraine has repeatedly said the move is the only way to stop more deaths.

Earlier on Saturday, it had been announced a temporary ceasefire had been called in order for civilians in Mariupol, a strategic port in the south east, and the eastern city of Volnovakha, to escape the fighting.

People take part in a demonstration in Trafalgar Square, London

However, this failed to hold, with Mariupol mayor Vadym Boychenko claiming thousands of people had gathered for safe passage out of the city and buses were departing when shelling began.

“We value the life of every inhabitant of Mariupol and we cannot risk it, so we stopped the evacuation,” he said.

The Ministry of Defence (MoD) said the proposed ceasefire was “likely an attempt to deflect international condemnation while resetting its force for renewed offensive activity”.

In an intelligence update on Saturday afternoon, the MoD said: “By accusing Ukraine of breaking the agreement, Russia is likely seeking to shift responsibility for current and future civilian casualties in the city.”

Labour leader Sir Keir Starmer said there was “no justification for Putin’s actions”.

Speaking at the Scottish Labour conference in Glasgow, Sir Keir said: “But let’s also be clear what Putin is afraid of – his fear is order and liberty.

“Afraid of democracy, of openness, of progress, and of a world which will move on without him, he is afraid of everything that we are most proud of.

“We know Putin’s playbook. He seeks division so we must meet him with unity.

“He believes the benefits of aggression outweigh the consequences so we must take a stand. And he believes the West is too corrupted to do the right thing, so we must prove him wrong. I believe we can.”